Are You Understanding Enough to Die for Inclusiveness?

They want you to be understanding, accepting, all inclusive, helpful, waiting with open arms and loving hearts.  These are the buzzwords the left uses but in fact they are just marketing argot, for there’s no basis in reality for their meaning when applied to illegals entering this country. They want you to be ready to step forward, checkbook in hand and checked ballot in your pocket to support their cause, but leave out many of the finer points of their objectives.

Yes, we’re talking about illegal aliens. Those who come uninvited, crawling and sneaking in the dead of night across barbed wire barriers, or hidden in the back of produce laden trucks like so many tightly packed cabbages. Whatever their reasoning and motivation, they have a plan and it does not align with our laws.

Illegal: That’s the term, and it openly defines its own essence. Not to be confused with some other word or phrase, meaning or obscure hidden attempt to be nice and helpful, but just illegal as defined by law, reason and Webster.

In theory they, the leftists, the radicals, and the media want you to be nice to people, to assist them, to better their lives, and to help them find the Utopia that they seek: legally or illegally. They want them to have an equal quality of life just like you, your family and friends who were born in this country, and who actually belong here… simply and legally.

There’s no black and white with liberals. It’s a vast ocean of gray stewn with wide nets where everyone is equal and free to come, go, be, work, exist as they please. A noble but insincere and insane motive.

In reality the numbers of people crossing the border, the hordes and throngs of those seeking unproclaimed asylum, looking for “a better life” are really, and they hope, just future voters for the Democratic cause. Here to participate, but only in the land of FREE and benefits, as provided from and paid for by the hard-working people who are justified in their presence on this, their foreign soil.

Liberals seek the numbers to increase their power, their hold on getting a doctrine, an agenda welded into place for future generations. And if the Democrats ever get that stronghold of foreign voters they seek, there won’t be another Republican voted into office until the last days of the Republic’s demise as it sinks into the sunset of failed commonwealths. And then it’ll be too late.

The names of those who were robbed, assaulted, raped, murdered are not inscribed on a wall of stars, but are nothing more to leftists than hidden collateral damage in the war to take over America. To make her the most inclusive third-world country on the immigration travel map. One that’s “almost” able to support the masses it receives.

When in fact those names, those casualties in that border battle are not to be forgotten, not to be overlooked nor passed by in some evolution of progressivism to make certain people more rich and powerful at the expense of others. And those others? Those are you, me, our friends and family who are bystanders, spectators of the immigration game. And it’s the fourth quarter, two minute warning, fourth down, 82 yards to the goal.

Virtually every state in the Union has seen its share of participants from this sad game of Run for the Border. And for many it has hit home on our streets, in our neighborhoods or to our very families. We’re reminded daily as we watch the news what happens when that “undocumented worker seeking an opportunity,” enters our neighborhood or God forbid, our very abode.

Many names have been ascribed to the legend of victims. Local casualties violated, injured, or murdered in the left’s quest for their powerful supremacy. Individuals,  known participants in their community; students, shop keepers, even law enforcement. 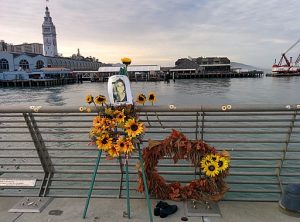 first to bring more national attention to this malignant malaise of migration. Some say murdered by accident on Pier 14 in a criminal’s sanctuary… San Francisco. But it was no accident her assailant, who had been convicted of 7 felonies and deported only to illegally return 5 times.

Recently the spirit of our republic’s understanding and acceptance was overcome by the unnecessary, brutal murder of Molly Tibbetts in the very heartland of America. Another young soul fallen victim to the accepting openness of the left’s border policy.

But these are just two of those sacrificed in the name of inclusiveness. Inclusive of those less fortunate seeking a better life, wanting only opportunity for them and their families. What a joke! They weren’t looking for a better life, but looking for the opportunity to take advantage, to be irresponsible, to be hidden from society, able to ply their illegal presence into some advantage for personal gain or pleasure; To commit crimes of murder, to sell drugs and traffic in innocent human beings.

30 year old Dominic Durden
killed on his way to work when hit by an illegal immigrant from Guatemala with a record of drunk driving convictions driving an unlicensed pickup truck.

21 year old Grant Ronnebeck
Shot by Apolinar Altamirano, who was in the country illegally from Mexico and charged with first-degree murder, armed robbery, burglary, unlawful flight.

38 year old Kevin Will, a Houston Police Officer
Killed by Johoan Rodriguez, 26, charged with the intoxicated manslaughter driving through a traffic stop. Investigators found “reason to believe” he was not a citizen.

17 year old Jamiel Shaw Jr.
Murdered by Pedro Espinoza, a DREAMer, an illegal alien from Mexico, the same day the 19-year-old gang member was released from jail, & battered a police officer. (I’m guessing that DACA recipients are not disproportionately valedictorians and Medal of Honor recipients as popularized.)

For the most part, these were everyday people just leading their lives, going about their own personal business and enjoying life; whether sitting at a stop light waiting to finish an evening of fun, walking home from school or at work trying to make a living. They didn’t volunteer to sacrifice themselves for social acceptance or humanitarian inclusion.

Our newspapers and court records are replete with victims too many to list here but not to be forgotten none the less. Such as Jamica Williams, Nabra Hassanen, Jose Chavez, Lauren Bump, Sarah Root, Edwin Jackson, State Trooper Edward Andersson shot and beaten and police sergeant Brandon Mendoza, killed by an illegal immigrant,  convicted of previous crimes, no Social Security number, no valid driver’s license – and the stories pile up like so many death certificates in a morgue.  None of their killers should have been in this country.

In these five examples for one year, about 5,400 incarcerated were deemed illegal aliens, an average of about 1,100 ea. And it’s important to note that in some cases, perpetrators were responsible for more than one murder.

Many of these were intentional crimes. Some accidents. And open border, immigration proponents are anxious to say that illegal immigrants are not any more likely to commit crimes than citizens and the media claims it’s a victimless phenomenon, as insignificant as the coming of fall leaves and as impossible to deter. I’d ask you to tell that to the 5,400 families affected in just these 5 states.

America is overrun with caring, compassionate, benevolent citizens. Anxious to give, help and support those in need. But don’t crawl through the deserts at night, steal away in the luggage compartment of an RV or send your unaccompanied children here to illegally take up space on our fermement and expect us to smile and be overly concerned about your future.

You may be one of these generous, humane people but….

Are you willing to die in order to be inclusive?

Design and Hosting by